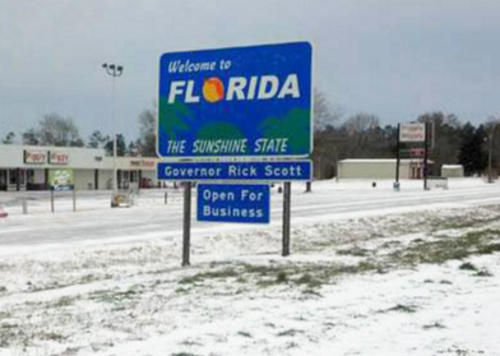 Unlike a lot of the rest of the United States, Florida is well known for its mild winters. While the Northern half of the country might be dealing with shoveling driveways and ice storms, down here in Florida we have a much more comfortable and relaxing season.

That’s why Jacksonville is such an awesome place to be in the winter. The stifling heat of summer is gone, and the real fun can get underway. Whether you’re a yearlong resident here or just visiting for a season, there’s always a ton to do during the winter months.

One of the big upcoming comedy events of the winter is Jim Gaffigan. He’ll be visiting the VyStar Veterans Memorial Arena at the end of December for a night of hilarity. Gaffigan, as you probably already know, is one of the kings of comedy. He was a co-star on the Ellen DeGeneres show years ago, has been in a number of movies, and now has several comedy specials on Netflix. He’s famous for the “Hot Pockets” bit that went viral back in the early days of YouTube but has been building a huge following of fans ever since then. This will be a huge event, and tickets are already almost gone. This tour—the Secrets and Pies Tour—might be one of his biggest ever. Fans of comedy definitely need to be looking forward to this so that they don’t miss out on one of the funniest guys of all-time.

Besides Gaffigan, there are a bunch of big-name musicians that will be coming to the VyStar Arena this winter. Ariana Grande, Celine Dion, and the Trans-Siberian Orchestra will all be performing here in December and January. These will be huge shows and are more than likely to sell out, even at a big arena like VyStar. The sooner you get a jump on making arrangements, the better.

If you’re from out of town, don’t forget about the little things that go into planning. You’ll need a hotel room, transportation or parking arrangements, and an idea of where you’ll be having your meals. Jacksonville has a ton of options here; we can even help you in some respects. The important thing is to have the plans under control before you leave so that you can have a fun time without the stress of planning getting in the way of your trip.

One of the awesome things about Jacksonville is the mild winters, and for those that come in from up North, it often doesn’t feel like winter at all. The temperature tends to hover between the high 40s at night to the high 60s during the day. This would be reminiscent of mid-spring or fall whether in New England. If this is something that you are used to, you might be interested in camping out this winter at one of the many campgrounds or RV parks that are nearby. This would make for an epic Jacksonville vacation—catching a comedy show or a concert and then heading back to the campgrounds for some rest.

If you’re looking for something a bit warmer, then one of the hotels or motels in and around Jacksonville are what you should be checking out. In fact, if you’re from out of town, having a good hotel on your side can help to ease a lot of the other concerns you might have, like transportation and dining. The staff will be a great asset when it comes to knowing how to get places and what the best restaurants to frequent are depending on your taste and dietary needs.