If you’ve ever gone out to the bars with your friends, you probably noticed that something was missing. Sure, you got a few drinks and had some decent food, but did you notice that there’s not much there in terms of entertainment? Maybe you’ve accidentally caught a band or had a pool tournament, but sometimes it’s nice just to have that entertainment provided for you. 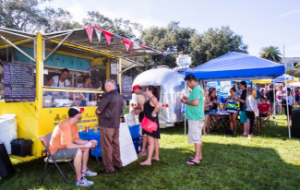 That’s where the comedy scene steps in. Comedy clubs combine all of the fun elements of a night out and give you something to do at the same time. You get your food and beverages brought to you most of the time, and you don’t need to worry about losing your seat at the bar. The entertainment is there, and it’s stellar night after night. Picking a strong club with a good draw of performers will never let you down.

And we’ve got world-class performers coming in and out of Jacksonville all the time. Hal Sparks, JP Sears, Gwen Templeton, and Ozrick Cooley all spend a lot of time performing here. Some of these comedians even call Jacksonville home. Additionally, we tend to get included on big world tours of the comedians you see on the specials, like Jim Gaffigan, Jim Dunham, and Jeff Foxworthy. There’s always something big going on here, and there’s always something fun for comedy fans to enjoy.

But good comedy alone isn’t enough. The growing expectation in the world of comedy clubs is that the food and drink will be world class. Whether the club has the longtime favorites on tap, they specialize in local microbreweries, or they’re more focused on cocktails, comedy clubs across the U.S. have been upping their game when it comes to the quality of the food and drink that is served. That’s definitely true here in Jacksonville, too. A lot of clubs are even moving beyond the traditional deep-fried food and moving more into gourmet cuisine. It all depends on what you’re looking for.

That’s a growing theme here in Jacksonville, actually. It’s such a diverse city, you’re bound to find what you’re looking for, regardless of what your tastes might include. Want a cold beer served out of the tap? You’ve got it! Specialized microbrewery bottles? Yup. Gourmet food or the regular old burgers and wings? Yes, and yes. Jacksonville really does have it all—both food and fun.

There’s not too much that’s better than sitting at a table with a cold beer, a plate full of wings, and a hilarious comedian behind the microphone. Small comedy clubs do this better than anyone else can. It’s a cozy, intimate atmosphere. It’s perfect for hanging out with your friends, getting your grub on, and laughing. It’s like going out to a restaurant or bar, but actually enjoying yourself while you’re there. A night out at the comedy club is exactly what you’ve been looking for.

But don’t take out word for it. Go ask your friends if it sounds like fun. Ask someone who’s been out to the comedy clubs and has seen the Jacksonville regulars perform. Check the online reviews and see what others say. We bet that pretty much everyone will agree that a night of fun and comedy is likely to be the time of your life. And if it’s not quite right for your tastes, there’s something down the street that will make you even happier.

Jacksonville’s one of the best places in the U.S. for comedy. But that’s not all. Comedy is always better when you combine it with good food and drink. That’s where it’s at, and you can find it all right here.